Analysis of the top 100 Australian companies by market capitalisation at 31 December 2014 has shown that over half of the CEOs received at least their target STI payment for the 2014 year.

Not all companies disclose their target and maximum opportunity for short term incentives and some disclose target payments amount that are equal to the maximum award possible under their bonus arrangements.

The distributions of target and maximum opportunity for these samples were as follows: 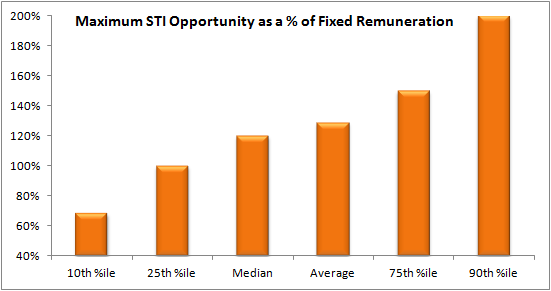 For the median company, target STI opportunity was approximately equal to fixed remuneration.

The percentage of the target and maximum actually awarded for the CEOs of these companies was as follows:

A small number of companies were excluded from the above distributions because they were undergoing a structural transition and their remuneration was unable to be separated into portions related to the entity post and prior to restructure.

Disregarding whether the target and maximum opportunity was disclosed, the distribution of STI paid as a percentage of fixed remuneration was as follows (with a sample size of 96):

This appears to show that companies that do not disclose target or maximum STI opportunities as a proportion of fixed remuneration paid their CEOs lower bonuses during the 2014 year than those that did.

Egan Associates regularly publishes insights and fields questions from the media in our areas of expertise.

Our most recent views can be found here or readers can subscribe to our monthly newsletter, access KMP Reports and download PDF versions of our past newsletters.